The Building a Stronger Britain Together (BSBT) programme supports civil society and community organisations who work to create more resilient communities, stand up to extremism in all its forms and offer vulnerable individuals a positive alternative, regardless of race, faith, sexuality, age and gender. The programme allows organisations that share these aims to bid for in-kind support and grant funding for specific programmes that deliver goals set out in the Counter Extremism Strategy. Building Bridges were successful in their bid to work in schools in Tower Hamlets in early 2019. This has led to 1,800 young people being impacted, and some have gone on to working with Jo Berry in their own projects. The project finished in July 2019.

Jo Berry reports on the success of the project 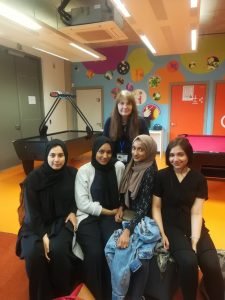 The issues they grapple with were far reaching. In many schools the questions of revenge were explored and some young people saying it was justified, on some occasions. I asked them to explore what happens after a revengeful act is carried out and got them thinking who would be affected. They began to see that with pain and anger there may be a human need to respond with more anger but actually it has the opposite result. We then explored what could be a safe way to be angry and how they could get support so they can move on from anger. It was clear that the idea not going for a non-revengeful response was new to many. Many comments were about how inspired they were, and they were going to look at their problems differently. They talked about challenges they feel as young people, such as bullying, knife crime, climate change and family challenges. My time with them covered the attacks in Christchurch (March 2019) and Sri Lanka (April 2019). As many young people in the audience were Muslims, I created a safe place for them to share how they felt. Many said they felt less safe as a result of these incidents and were worried. I gave them examples of people reaching out to help Muslims feel safe, and Muslims helping Christians. I helped them see that there were many caring people around and to focus on that. I also really heard them, and acknowledged it is ok to feel unsafe. In some schools the daily harassment they experience was explored and out of this came one of the projects. 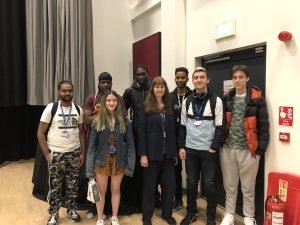 In every school I spent time empowering them to be positive change makers, and giving examples of young people. I gave them examples of people reaching out of their other and building bridges. 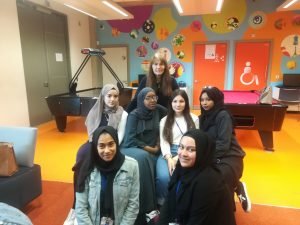 One of my groups were told that a particular set of girls in year 10 were struggling to speak in class as they were so insecure about the reaction of the boys and worried how they would be treated if they gave the wrong answer. As a result the girls in year 13 that I was working with planned to do 6 workshops, to enable the younger girls to be more confident and to help them find their voice.

They have all learnt listening skills and the importance of acknowledging and looking for the positive support they can give. We have had a session on their own inner negative messages, two very emotional sessions where they shared their own experiences of being 12 and scared to speak and the inner obstacles they have now. Each session ended with them choosing to find a positive message they can give themselves plus hearing from their friends as to how they see them. This has deepened the trust and support in the group and I know these girls are going into their A level year with huge support from each other. The issues we have covered are many and include: body shaming, cyber bulling, how to respond when the boys keep mentioning their mistakes, developing resilience, role models of young women who talk about mental health and inner beauty.

One participant said, “I found it incredible. It was so moving and inspiring to see someone choose empathy and understanding. It made me question the way I express my own opinion.”

In particular this feedback moved me deeply as it is the impact I would love to happen but can never be sure that it will: ‘Being able to express how I, as a young Muslim, feel about certain topics without being told I’m wrong.’ Another wrote, ‘She cares about us minorities’.

The feedback from Sarah-Jane Gordon, Head of Sixth Form at Langdon Park School, Tower Hamlets sums up the impact in her school:
“We have been lucky enough to have Jo Berry visit us many times this year, and the impact of her work has been profound. In the large group sessions where Jo shared her story and then invited questions and discussion, she deftly supported students in reflecting on their own experiences of conflict and being labelled. Most of our students are Muslim, and they really valued the opportunity she gave them to express how they were feeling after the mosque attacks in New Zealand which had happened the previous week.
After these sessions, there was a definite shift in students’ feelings on these issues – initially they felt quite powerless and very much saw themselves as victims of a narrative that portrayed Muslims as a threat and ‘the other’.
With Jo’s encouragement, they began to look more deeply at extremist narratives and think critically about things rather than just jumping to conclusions. I recall a particularly significant moment when one of our Year 12s, in his second session with Jo, said of the mosque attacker: ‘He’s just a victim whose story we haven’t heard yet’. Recognising that anti-Muslim sentiment often stems from a lack of understanding of Islam, a group of girls have now decided to go and give talks to students in other areas of London so that they can ‘show them that we’re not all terrorists, that we hate ISIS even more than they do, and explain to them what our religion is actually about has a real flair for giving young people time and space to reflect and making them feel heard.
This safe, non-judgemental atmosphere that she creates has allowed students to express things that we, as busy teachers moving from lesson to lesson, might not have heard otherwise. In the extended work she has done with some of our Year 12 students, I have seen all involved grow in confidence and recognise their own potential for raising awareness and creating change. They are now not only feeling empowered, but are now, with Jo’s support, at the final stage of planning to take action on the issues that matter most to them. Seeing how Jo has taken a wholly negative experience and made something positive come out of it has inspired them to feel they can do the same.”