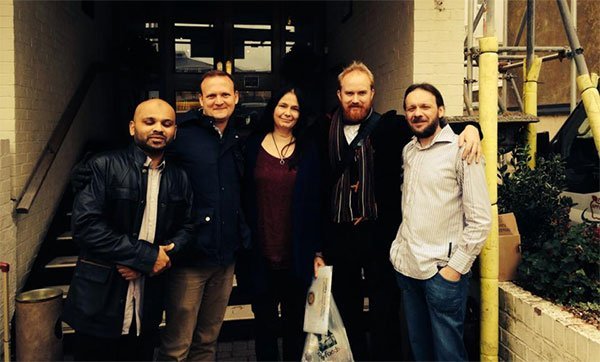 The commemoration events around the 30th anniversary in Brighton took several forms. Jo Berry and Patrick Magee spoke and participated in several events together leading up to and following the central commemoration on the actual anniversary of the bombing.

We were very lucky to have had Kai Brand-Jacobsen to facilitate, teach and organise with us the 30th anniversary event.  Kai F. Brand-Jacobsen is Director of the Department of Peace Operations of PATRIR and an advisor on Peacebuilding to the Commonwealth Secretariat, the Organisation for Security and Cooperation in Europe (OSCE), the All-Party Parliamentary Working Group on Conflict Issues, and others.Report from Kai Brand-Jacobsen

Brighton 30 Years on – “What’s the Alternative – Beyond Violence, Injustice and Extremism”

Prior to the day event, all of the speakers who were in Brighton met together both to get to know each other, share together each other’s experiences and stories, and to already begin to see together how we could continue and carry this work further. Having spent 17+ years working in peacebuilding and war and conflict affected contexts I cannot overstate how inspiring this meeting and discussion were. Those taking part had all been involved in carrying out or experiencing extreme acts of violence. Through the discussions, a strong common bond became evident – based on a commitment to use their own lives and experiences to help others (in our communities and globally) go beyond violence and extremism as responses to conflicts. This connection is now being developed further and we are working on shared peacebuilding events.

The day event took place at ‘The Old Marketplace’ in Brighton – a superb events facility. The staff were highly supportive and professional and contributed to an excellent event. While we had originally intended the event to be directed towards a larger number of youth, this was reshaped as the day came closer to strengthen impact. The final participants group included approx. 60 people coming from youth / students / youth members of youth organisations, civil society organisations, local authorities, police and those involved in the UK government’s programmes on ‘prevention’ and engaging with diverse communities.

The day opened with a brief welcome by Jo Berry and myself setting the scene and welcoming, and then moved into a session with Jo and Patrick discussing their experiences, their dialogue together, and the significance of the day for them both. This was followed by open discussion and questions from the audience. After this I facilitated a session with the participants on understanding and engaging with conflicts, violence and peacebuilding.

This was then followed by the four survivors of extreme violence sharing their stories, with two members of the Parents Circle from Israel and Palestine speaking to us by skype, a genocide survivor from Rwanda, and a survivor from the July 22 2011 massacre in Norway.

After this we had the formers speak, including a former member of an extremist Islamic organisation which carried out terrorist attacks, a former gang leader from the UK, a former British soldier who served in Northern Ireland, and a former member and leader of an extreme-right wing white supremacist movement in the United States.

The power of these people’s stories, and the effect they had on the audience cannot be overstated. The speakers spoke openly of their experiences, what led them into violence or how violence affected their lives, and what they feel is necessary to overcome and deter people from joining violent paths. The bringing together of both those who had carried out and those who had experienced violence from such powerful and different contexts and backgrounds had an extraordinary impact. This, combined with sessions on peacebuilding and discussing and sharing with participants real, concrete, and inspiring stories of what can be done to go beyond violence, made the day very unique and special.

At the end of the day I counted 12 different individuals from the audience who took the time to come up to me and tell me directly that “this day has changed my life”. I have taken part in more than 400 major events around the world through my work, many of them very, very powerful.  Few have had people come so quickly with such a strong, and true response.

Connections were made before the end of the day with: 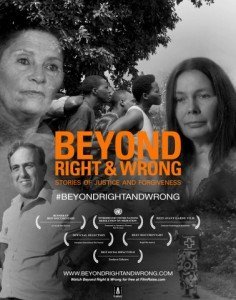 The evening event included the showing of the film “Beyond Right and Wrong” followed by discussion . Nearly all of those who took part during the day event stayed for the film showing and discussion, and many who were unable to join during the day came to take part as well – including the Director of Forgiveness Project – one of the most important organisations working with reconciliation, healing and forgiveness internationally. 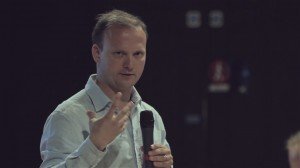