Building bridges for Peace hosted two events on 12 October 2014, the 30th anniversary of the IRA bombing of the Grand Hotel in Brighton.

The first event was a conference, ‘What’s the alternative? Beyond Violence, Injustice and Extremism’, and the 2nd was a screening of the film ‘Beyond Right and Wrong’, which was followed by a panel with exceptional speakers.

The conference was geared primarily towards young people in Brighton, and those who work them. Approximately 60 people attended from a wide range of community groups, schools and other organisations such as Prevent. Kai Frithjof Brand-Jacobsen, from Romania, the Director of the Department of Peace Operations of PATRIR and renowned worldwide peace trainer facilitated the day and gave some excellent training sessions in peace building. We feel very fortunate to have had Kai attend and share his valuable knowledge.

Many amazing stories and experiences were shared to demonstrate how the use of violence can so deeply affect people’s lives and tools & ideas were put forward as to how things can be done non-violently. Jo Berry, founder of Building Bridges for Peace shared a platform with Patrick Magee, the man who planted the bomb in Brighton, which killed Jo’s father. Formers, Lee Lavis (former British soldier), Omar Mulbocus (former member of Hizb in Mauritius and Al Muhajiroun), Shaun Danquah (former gang member) and Arno Michaelis (formerleader of a worldwide racist skinhead organization) shared their stories as did a panel of survivors: Jean Paul Samputu (survivor of the Rwandan genocide) , Bjorn Ihler (survivor of the attack on Utøya Island in Norway in July 2011), Bassam Aramin and Rami Elhanan (members of the “Parent’s circle-family Forum”) who lost their daughters in Palestine/Israel.

Participants had time to reflect on the stories they’d heard and feel how that was relevant to them in their lives. The day was intense and inspirational and it changed people lives.

We had a packed auditorium for the film screening of ‘Beyond Right and Wrong’ in the evening with the audience absorbed and captivated by the film. John Paul Samputu sang one of his forgiveness songs about the Rwandan genocide in the break which was very powerful and so beautiful. The film was followed by a panel chaired by Simon Fanshawe. Sitting on the panel were Jo Berry, Patrick Magee, Jean Paul Samputu and Bjorn Ihler.

Many of the questions afterwards reflected people wanting an understanding of why Patrick Magee was there in Brighton on the anniversary and interested in the purpose of Jo and Patrick meeting after 14 years. Understanding was also sought on Jean-Paul’s journey of moving forward and forgiveness after losing his entire family in the Rwandan genocide. Bjorn shared his views on violent extremism having been affected directly by the shootings in Norway.  Jo Berry, Founder 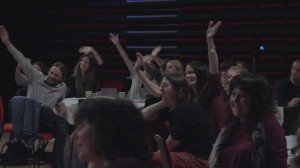 Participating in the Brighton weekend as a trustee of Building Bridges for Peace was a very moving and humbling experience.  A number of the speakers met for dinner on the Saturday evening, and as I was sat at the table with them I looked around and could only marvel at the tumult of human experience with which I was surrounded, and, above all, admire the way in which each person had chosen to deal with what life had thrown at them.  I was in the presence of living proof that the most heinous harm doesn’t have to produce more harm.  On the contrary, it can be turned to good.

The next day saw the workshop, attended by about 50 people, many of them young.  From Jo and Pat’s presentation on, we were transfixed at the stories we heard and the positive outcomes to which the speakers’ courage had given rise. Let’s not forget where we were – just a few hundred yards from where, exactly 30 years before, Jo had lost her father and Pat had planted the bomb that killed him. After over 100 meetings, Jo and Pat are still talking, still learning from each other, and, perhaps most importantly, we are learning from them.

It was clear from conversations I overheard and took part in during breaks in the day that there was some alchemy at work here.  Somehow, sadness piled upon sadness turned into hope piled upon hope, as our speakers told us how they had turned bad into good through courageous listening, through dialogue, and through the attempt to understand and humanise – rather than demonise – the other.

So, an extraordinary weekend spent in the presence of extraordinary people. I was left thinking that the challenge we face is turning the extraordinary into the ordinary, and peace into common sense. Trustee

I arrived in Brighton to the commemoration event late. I walked in to a hushed room and immediately felt a strong sense of awe, deep respect and love. I stood for a minute and felt a calm descend over me. I listened captivated to the stories shared by the formers and survivors. Such depth of heart filled humanity, such commitment to peace and changing lives with their courageousness, honesty and love. The event was very professional but there was no sterility or over formalness. It was warm and embracing, the openness inviting and creating a safe space to share our own stories. The connections between everyone were great to see and be a part of. The beauty of the friendships between those who would frequently be enemies was so moving. I came away humbled by the experience and with the realisation that if these amazing people could overcome through empathy and dialogue to transform major conflicts and trauma, then so too can the rest of us. I learnt some very useful skills to deal with just the day to day conflicts that arise within families and communities and was totally inspired to do so. I look forward to being able to participate in the future and I sincerely hope that there will be more of these fantastic opportunities to engage with true peacebuilding on many levels.   Claire Thompson, Trustee