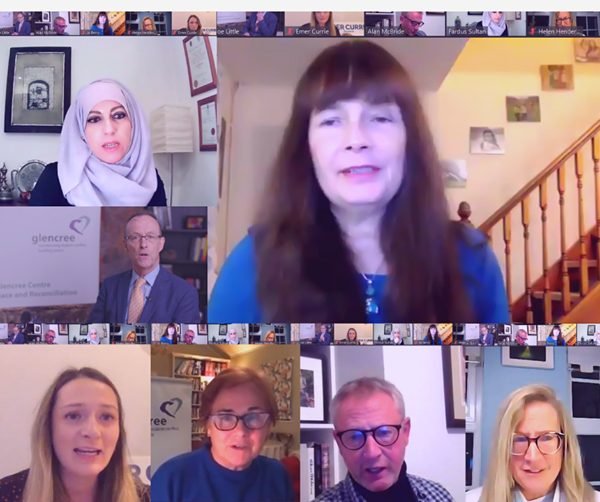 In the 2020 Una O’Higgins O’Malley Webinar, peacebuilder Jo Berry shared her personal journey of reconciliation following the violent loss of her father, Sir Anthony Berry, who died in the IRA Brighton bombing of 1984. This year’s event, the third in Glencree’s annual lecture series, was hosted online due to restrictions of Covid-19 and attracted over 190 guests from across Ireland, Britain, mainland Europe, the U.S. and Africa.

Jo’s difficult and painful journey of healing and reconciliation led her to meet Patrick Magee, the man who set off the bomb. In a series of face-to-face meetings, including one at the Glencree Centre for Peace and Reconciliation in 2000, Jo came to understand and see the humanity in the man who killed her father. Since then, she has shared a platform with Patrick Magee over 300 times to inspire others to choose non-violent solutions to heal divisions. Jo founded “Building Bridges for Peace” and has dedicated her life to promoting peacebuilding and conflict resolution around the world.

Jo’s journey of reconciliation mirrors that of Glencree co-founder Una O’Higgins O’Malley whose father, Kevin O’Higgins, Minister for Justice in the first government after partition, was shot dead by anti-treaty forces in 1927. In reconciling with her loss, Una forgave her father’s murderer despite the claim he ‘danced on his victim’s grave’. Una continued to campaign for peace and reconciliation throughout her life.