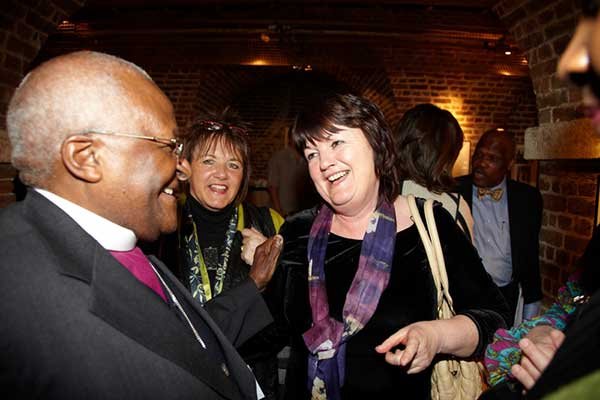 It is with great sadness we announce the sudden death of Anne Gallagher who died on August 7th, 2013  in Dublin,. She made a huge impact around the world and her story can be seen here.  Jo Berry, Pat Magee and others close to her share their tributes.

“I first met Anne in 1985 when I went to Northern Ireland to make
sense of my Father’s death from the IRA in 1984. Anne warmly welcomed me and introduced me to many people who she thought could help me. She shared her own story, one of her family being involved in the paramilitaries and her own vision for peace and dialogue. Her brother Paul wrote to me from prison in 1986 and his letters which I still have, enabled me to move forward in seeing the humanity in the
‘other’.

After the peace process I met Anne again and she had established Seeds of Hope and created a visionary inspiring pamphlet about ex-prisoners. Anne was a whirlwind of peace energy; she had the gift of bringing together people from all backgrounds.

At a peace conference in Dublin in 2000 I shared my poem,’Bridges Can be Built’ and a friend of Anne’s said he could arrange a meeting between Pat and I. Three months later Anne rang me one morning at 8 30am as I was preparing to go to Glencree Reconciliation Center for the weekend with the news that Patrick Magee would be at her house at 7pm and asked whether I could be there. I was very scared as I travelled on the ferry between Holyhead and Dublin but I knew Anne would be there giving me support. Anne was the perfect person to facilitate our meeting as for her it was normal to see the humanity in everyone, she saw no one as the enemy. I remember her words that Pat would be more scared than I was and that helped me calm down. Anne was very sensitive to our needs during the 3 hours and came in at times with
tea and biscuits but left us to it as she could see we did not need anyone else there. She was instrumental in arranging for us to be filmed as well as asking us to speak at our first public talk, her Seeds of Hope conference.

For Anne everything was possible, she believed in miracles and they happened around her all the time. She was passionate about forgiveness and peace and her work touched people from all over the world. I am so grateful for all Anne gave me.  She has inspired me for 29 years and I will take her vision for peace where ever I go.”

Harvey Thomas, former Tory director of presentation and a senior adviser to Mrs Thatcher, was staying in the Grand Hotel on the floor above the  bomb when it went off.  He shares his personal memories.

“Marlies and I are so sad not to have Anne with us.  She was only one person, but she had an extraordinary impact on Forgiveness, Reconciliation and Restorative Justice world-wide.

Jo Berry introduced us to Anne back in 2000 and Anne arranged for Pat Magee and I to meet for the first time.  That has led to a long-term friendship that in itself has been a blessing to many around the world.

“It has  been said that you may only fully realise a person’s worth in their absence. It is  certainly true that I and many others will miss Anne. But in life she was so strong a force for good and many relied, even depended on her many strengths that no one who knew her or whose lives she touched, could fail to appreciate her value. I learned to trust Anne’s judgement and she was someone I could and did confide in. Many instances, too many to recall all, when her presence and her wisdom made a difference. I remember  the first meeting with Jo Berry, Anne knew how to manage our fears and had the insight into our  mutual  need to talk privately, and accordingly ushered us into her  conservatory. I doubt whether any subsequent meetings would have occurred without her guiding wisdom. Thus the start of a twelve year exploration of the causes and effects of violence,  during which Ann at times helped to facilitate.”