The disarming power of empathy

Jo Berry gives the audience of Meaning 2016 a deep and powerful insight into the true nature of empathy. She tells the story of her meetings with Patrick Magee – the man who planted the bomb that killed her father in 1984. Meaning is the annual gathering for people who believe business can and must be a force for positive change in our dynamic and volatile world.

Beyond Right & Wrong: Stories of Justice and Forgiveness 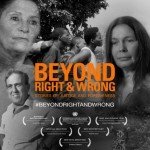 Jo Berry featured in this 2012 American documentary film about restorative justice and forgiveness. The film depicts victims and perpetrators of the Rwandan genocide, the Israeli–Palestinian conflict, and The Troubles in Northern Ireland. This life-changing documentary explores the intersections of justice and forgiveness as survivors heal from these tragedies.
You can watch it online:
http://beyondrightandwrong.com/